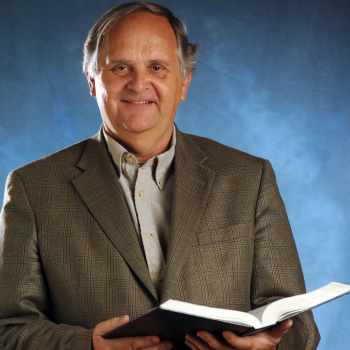 James F. Ponsoldt joined the University of Georgia School of Law faculty in 1978 and was appointed as the Joseph Henry Lumpkin Professor of Law in 1997. He retired from the law school's full-time faculty in 2008.

Specializing in the areas of antitrust, corporations, criminal procedure and communications law, Ponsoldt's scholarship includes: "Entrapment When the Spoken Word is the Crime" in theFordham Law Review (with Stephen Marsh), "The Judicial Legitimization of Horizontal Price-fixing among Partially Integrated Health Care Providers: An Antitrust/Health Care Case Study" in the Alabama Law Review (with Lance McMillian) and "Refusals to Deal in 'Locked-in' Health Care Markets" in the Utah Law Review.

Ponsoldt has extensive experience in litigation involving antitrust and criminal law enforcement, including being senior trial attorney at the U.S. Department of Justice during the Ford and Carter administrations. After private practice in New York and Washington, D.C., he served as appellate counsel for the Justice Department in United States v. AT&T, which ultimately resulted in the consent agreement breaking up the communications monopoly. In addition, he served as counsel in the 1980s when UGA and the University of Oklahoma brought suit against the NCAA, resulting in the U.S. Supreme Court ruling that NCAA regulations limiting college football television rights constituted an antitrust violation (NCAA v. Board of Regents). Ponsoldt also represented a group of UGA law school graduates in Palmer v. BRG of Georgia, a class action suit claiming that certain bar review publications violated antitrust legislation. The U.S. Supreme Court ruled in the students' favor, resulting in the cost reduction of bar review courses and more competition in the area. More recently, he has consulted for several public corporations and their boards on corporate governance issues in the wake of Wall Street scandals.

During the past 20 years, Ponsoldt has contributed numerous editorials to The New York Times, TheAtlanta Journal-Constitution and local publications on a variety of legal and social policy issues. He has been interviewed by the Fox National News Network, National Public Radio, The Christian Science Monitor and many other media outlets.

Ponsoldt has testified on antitrust matters before the U.S. House of Representatives Judiciary Committee and the Georgia Public Service Commission. He frequently serves as a legal consultant, keynote speaker and lecturer, and has made presentations to the Georgia General Assembly, the National League of Cities and the Brussels (Belgium) Bar Association. Additionally, he was elected to a four-year term on the Athens-Clarke County Board of Education in 1999.

Ponsoldt earned his bachelor's degree from Cornell University and received a fellowship for graduate work at Brandeis. He then earned his law degree from Harvard University. Ponsoldt has served as a visiting professor at Tulane and Cardozo law schools. Most recently, for the second time, he lectured on competition law at the University Jean Moulin (Lyon) in France and produced a film, "Junebug and Hurricane," regarding spouse abuse, which was an official selection of the Toronto, Seattle, Atlanta, Nantucket, Palm Springs and other film festivals.

Ponsoldt has been involved beginning prior to his 2008 law school retirement with the editing of screenplays written by his son, James Ponsoldt, including "Off the Black," "Smashed" and others. He has also addressed legal issues regarding and participated in the editing process for other of his son's films, such as "The Spectacular Now" and "The End of the Tour." Ponsoldt continues to provide consulting services for selected federal litigation.

Toward the Reaffirmation of the Antitrust Rule of Per Se Illegality as a Law of Rules for Horizontal Price Fixing and Territorial Allocation Agreements: A Reflection on the Palmer Case in a Renewed Era of Economic Regulation, 62 SMU L. Rev. 635 (2009).

A Comparison Between U.S. and E.U. Antitrust Treatment of Tying Claims Against Microsoft: When Should the Bundling of Computer Software Be Permitted?, 27 Nw. J. Int'l L. & Bus. 421 (2007) (with Christopher D. David).

Souter's Opinions Must be Probed, The Atlanta Constitution, July 29, 1990.

Georgia Needs a Policy on Water, The Atlanta Constitution, April 17, 1988.

Competition and-or Efficiency: A Review of West German Antimerger Law as a Model for the Proposed Treatment of Efficiency Promotion under Section 7 of the Clayton Act, 9 Nw. J. Int'l L. & Bus. 296 (1988) (with Christian Westerhausen).

Legal Reasoning and the Jurisprudence of Vertical Restraints: The Limitations of Neoclassical Economic Analysis in the Resolution of Antitrust Disputes, 62 NYU L. Rev. 1125 (1987) (with John J. Flynn).

The Enrichment of Sellers as a Justification for Vertical Restraints: A Response to Chicago's Swiftian Modest Proposal, 62 NYU L. Rev. 1166 (1987).

The Unreasonableness of Coerced Cooperation: A Comment upon the NCAA Decision's Rejection of the Chicago School, 31 Antitrust Bull. 1003 (1986).

Clarifying the Attempt to Monopolize Offense as an Alternative to Protectionist Legislation: The Custodial Relevance of "Dangerous Probability of Success," 61 Notre Dame L. Rev. 1109 (1986).

Accomplice Accusations in the Criminal Process: The Application of Sixth Amendment Tests for the Reliability of Hearsay Evidence to Probable Cause Determinations, 16 Rutgers L. J. 869 (1985).(With Jerry L. Steering).

Balancing Government Efficiency and the Protection of Individual Liberties: An Analysis of the Conflict between Executive Branch "Housekeeping" Regulations and Criminal Defendants' Rights to a Constitutionally Fair Trial, 19 Harv. C.R.-C.L. L. Rev. 349 (1984).

When Guilt Should be Irrelevant: Government Overreaching as a Bar to Reprosecution under the Double Jeopardy Clause after Oregon v. Kennedy, 69 Cornell L. Rev. 76 (1983).

The Expansion of Horizontal Merger Defenses After General Dynamics: A Suggested Reconsideration of Sherman Act Principles, 12 Loy. U. Chi. L.J. 361 (1981).