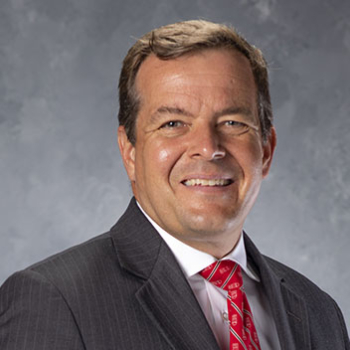 Peter B. "Bo" Rutledge, the holder of the Talmadge Chair of Law, became dean of the University of Georgia School of Law on January 1, 2015.

As dean, Rutledge has worked to steer the law school to be one of the best returns on investment in legal education in the country. Since 2015, the law school has set fundraising records - both for overall giving and annual giving - during the Commit to Georgia Campaign, which ultimately raised over $61 million for the law school. Much of this support has gone to student financial aid which, coupled with a near-complete tuition freeze, has dramatically reduced aggregate student indebtedness and per-student indebtedness. Along with strong national employment statistics and ultimate bar passage rates, this strategy has been recognized in a variety of media and the school has been rated the #1 or #2 Best Value in legal education by National Jurist for five straight years, including an historic "three-peat" as the #1 Best Value.

To fulfill this vision, the law school has pursued a five-part strategy. Embodied in the motto "Prepare. Connect. Lead." this strategy includes:

Prior to his appointment as dean, Rutledge served as the associate dean for faculty development working closely with the law school's faculty, especially its untenured professors, to expand and promote scholarly and research activities.

In 2008, the U.S. Supreme Court appointed Rutledge to brief and argue the case Irizarry v. United States as amicus curiae in defense of the judgment below. He subsequently won the case, joining the ranks of a select few advocates who have successfully defended a judgment below when the government refused to do so. Notably, he has served as a judicial clerk at the U.S. Supreme Court for Justice Clarence Thomas and at the U.S. Court of Appeals for the Fourth Circuit for Chief Judge J. Harvie Wilkinson III.

An accomplished teacher, he has received several teaching awards, including most recently the 2016 John C. O'Byrne Memorial Award for Contributions Furthering Student-Faculty Relations.

In addition to his academic and legal work, Rutledge remains active in professional circles. He has advised parties on matters of international dispute resolution and has served as an expert in both litigation and arbitration. He is a listed arbitrator with several international organizations. He has testified on several occasions before Congress on pending arbitration legislation, regularly spoken to broadcast and print media, and given speeches to a range of professional audiences on matters such as international dispute resolution, arbitration and the Supreme Court.

"The Proportionality Principles and the (Amount in) Controversy" in American Illness, (Yale Univ. Press, 2013).

Arbitrating Disputes Between Companies and Individuals: Lessons From Abroad, 65 Disp. Resol. J. 30 (2010) (with A. Howard).

Who Can be Against Fairness: The Case Against the Arbitration Fairness Act, 9 Cardozo J. Conflict Res. 1201 (2008).

"Post-Hague Hangover: Three Predictions About the Future of the Law Governing the Enforcement of Foreign Judgments and Arbitral Awards," in European Union Issues from a Portuguese Perspective (The Catholic University of America, Columbus School of Law 2007).

What is the Definition of an "Organ" Under the Foreign Sovereign Immunities Act?, 34 Supreme Court Preview 351 (2007).

Private Modifications of the Ground for Judicial Review of Arbitral Awards: A Question of Institutions, 18 Mealey's Int'l Arb. Rep. 35 (Oct. 2003).

Supreme Court of the United States