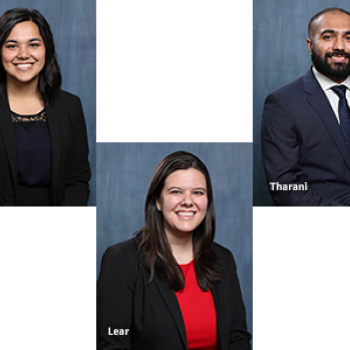 Congratulations to third-year students Haley K. Kairab, Taylor N. Lear and Navroz N. Tharani for finishing as one of the top four teams in the National Moot Court Competition. The trio won Region 13 of the tournament in November, earning the right to compete for the national title.

The National Moot Court Competition is the oldest and most prestigious moot court tournament in the country. Each year, teams from more than 120 law schools across the nation compete in this contest, which is sponsored by the New York City Bar Association and the American College of Trial Lawyers.

Of note, Kairab was named best oralist of the final round of the Region 13 contest.