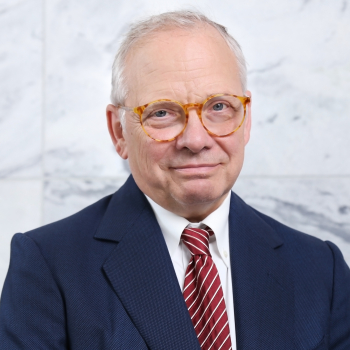 Michael L. Wells joined the Georgia Law faculty in 1978 and, in 2004, was named the holder of the Marion and W. Colquitt Carter Chair in Tort and Insurance Law after occupying a prestigious J. Alton Hosch professorship for 13 years. He specializes in torts, federal courts and constitutional litigation.

Select articles include: "A Common Lawyer's Perspective on the European Perspective on Punitive Damages" in the Louisiana Law Review (2010), "State-Created Property and Due Process of Law" in the Georgia Law Review (2009) (with Alice Snedeker), "Scott v. Harris and the Role of the Jury in Constitutional Litigation" in Review of the Law (2009), "International Norms in Constitutional Law" in the Georgia Journal of International and Comparative Law (2004) and "Proximate Cause and the American Law Institute: The False Choice Between the 'Direct Consequences' Test and the 'Risk Standard'" in the University of Richmond Law Review (2003).

Wells is fluent in French and has served as a visiting professor at the University of Lyon (III) in Lyon, France, on six occasions and as a professor at the Duke-Geneva Institute in Transactional Law. He is a member of the American Law Institute.

Wells earned his bachelor's and law degrees from the University of Virginia, where he served as articles editor for the Virginia Law Review. He has served as a judicial clerk for Judge John D. Butzner Jr. of the U.S. Court of Appeals for the 4th Circuit and practiced with the law firm of Covington & Burling in Washington, D.C., for two years before joining the law faculty at UGA. He has also served as a visiting professor at the College of William & Mary and Boston University, and he has been a visiting scholar at the University of Aix-Marseille in Aix-en-Provence, France.

Proximate Cause and the American Law Institute: The False Choice Between the "Direct Consequences" Test and the "Risk Standard," 37 U. Rich. L. Rev. 389 (2003).

Remedies for the Misappropriation of Intellectual Property by State and Municipal Governments Before and After Seminole Tribe: The Eleventh Amendment and Immunity Doctrines, 55 Wash. & Lee L. Rev. 849 (1998) (with Paul Heald).

Scientific Policymaking and the Torts Revolution: The Revenge of the Ordinary Observer, 26 Ga. L. Rev. 725 (1992).

The Past and the Future of Constitutional Torts: From Statutory Interpretation to Common Law Rules, 19 Conn. L. Rev. 53 (1986).

Constitutional Remedies: A Reference Guide to the United States Constitution(Praeger Press 2002) (with Thomas A. Eaton).