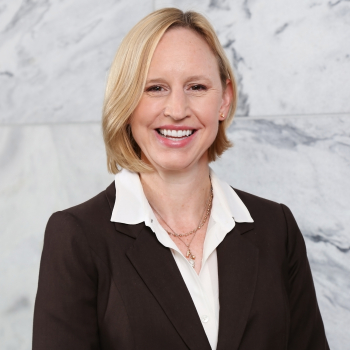 Courses
Constitutional Law I and II
Media Law
The Supreme Court: Current Term
The Press and the Constitution
Biographical Information

Sonja R. West joined the University of Georgia School of Law in the fall of 2006 and is the holder of the Otis Brumby Distinguished Professorship in First Amendment Law, a post shared by the law school and Grady College of Journalism and Mass Communication. She specializes in constitutional law, media law and the U.S. Supreme Court.

Prior to joining the School of Law faculty, West taught as the Hugo Black Faculty Fellow at the University of Alabama School of Law. She has also served as a judicial clerk for U.S. Supreme Court Justice John Paul Stevens and Judge Dorothy W. Nelson of the U.S. Court of Appeals for the Ninth Circuit. Her other professional experience includes several years as an associate attorney for the Los Angeles law firms Gibson, Dunn & Crutcher and Davis Wright Tremaine, where she represented media clients on a variety of First Amendment and intellectual property issues at the trial and appellate levels.

In recognition of her scholarship, West was awarded the School of Law's 2022 Faculty Research Award in Public Law, the Association for Education in Journalism and Mass Communication's 2017 Harry W. Stonecipher Award for Distinguished Research on Media Law and Policy, and the National Communication Association's 2016 Franklyn S. Haiman Award for Distinguished Scholarship in Freedom of Expression. Her work has been published in numerous law reviews and journals including the Harvard Law Review, the California Law Review, the UCLA Law Review, the Michigan Law Review and the Northwestern Law Review.

West also has authored articles about legal issues and the U.S. Supreme Court for Slate, CNN, Washington Monthly and The Huffington Post. She is a frequent commentator for various news media outlets such as The New York Times, The Washington Post, The Wall Street Journal, The Economist, The National Law Journal, Reuters, MSNBC's "The Last Word with Lawrence O'Donnell," Bloomberg News, The Guardian, The Boston Globe, National Public Radio and Public Radio International.