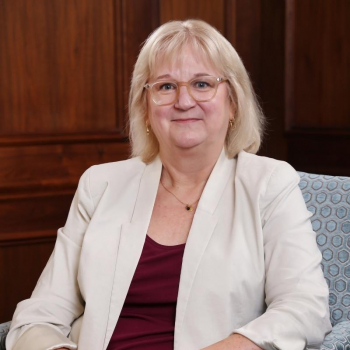 Carol A. Watson retired from the University of Georgia Alexander Campbell King Law Library as its director on January 1, 2021. She was responsible for the vision, leadership and management of all aspects of the law library including strategic planning, budgeting, collection development, technology and personnel.

Watson was no stranger to UGA. She earned three of her four tertiary degrees at the university including a J.D. from the School of Law. In 1987, Watson began her professional career at the university's law library. Twenty-three years later, she was named its director. Previously, she served as the associate director for information technology, supervised the law school's IT Team and provided legal reference services.

Watson has written extensively and presented frequently on the topic of institutional repositories. She received the 2015 AALL Academic Libraries SIS Outstanding Article Award, along with James M. Donovan & Caroline Osborne, for the article The Open Access Advantage for American Law Reviews, Edison 2015-03A, http://www.jptos.org/news/375/100.html. In 2013, she was named a bepress Institutional Repository All-Star. In 2015, she was a member of the steering committee which organized the Law Repositories 2015: Shaping the Future conference.

Watson is a member of the Georgia Bar Association and American Bar Association, and she is active in the AALL at the national level and in the southeastern chapter. She is the past chair of the AALL Continuing Professional Education Committee and the past chair of the AALL Annual Meeting Program Committee. In 2020, she was inducted in the AALL Hall of Fame, and she received the AALL Volunteer Service Award in 2016. Watson is the past president of SEAALL and the 2014 recipient of the Service to SEAALL Award. Watson is the past-chair of the American Association of Law Schools (AALS) Section on Law Libraries and Legal Information.

Information Literacy in a Fake/False News World: An Overview of the Characteristics of Fake News and its Historical Development, 46 Int'l J. Legal Info.93 (2018).

Institutional Repositories: A Plethora of Possibilities (with James Donovan), 21 Trends in Law Library Management and Technology 19 (2011)